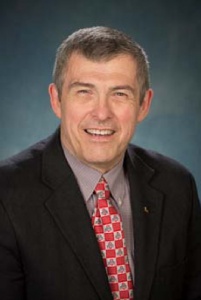 Terry L. Gustafson is Professor and Vice Chair for Undergraduate Studies in the Department of Chemistry andBiochemistry at The Ohio State University. He received his B.S. in chemistry and physics at Moorhead State University (MN) and his Ph.D. in chemistry from Purdue University. He worked for eight years at Sohio Research and Development (later BP America Research and Development) before joining the faculty at The Ohio State University in 1989. He has been a Distinguished Visitor at the University of Auckland (2012) and a Visiting Professor in Japan (1994) and France (1999). His current research interests include the investigation of charge and energy transfer and fundamental studies of excited state photophysics and photochemistry. He serves on the International Organizing Committee for the International Conference on Time-Resolved Vibrational Spectroscopy and on the Editorial Advisory Committee for the Journal of Raman Spectroscopy.