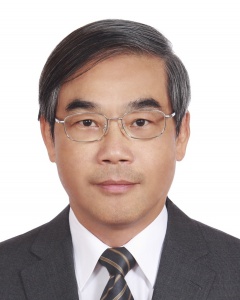 Dr. Wang is a distinguished research fellow of the Institute of Atomic and Molecular Sciences (IAMS), Academia Sinica, and an adjunct professor of the Department of Physics, National Taiwan University, where he received his BS in 1979. He received his PhD in physics from the University of Chicago and worked at Bell Labs before joining IAMS in 1991 as an associate research fellow. Between 2004 and 2010, he served as the director of IAMS. He is interested in exploring the concept of ‘constrained self-organization’ for the fabrication of nanostructures and naomaterials with novel physical and chemical properties. For example, his group discovered magic-number clusters with enhanced stability on a specific crystal surface and fabricated arrays of Ag-nanoparticle on anodica aluminum oxide templates with self-organized nanochannels. Such arrays exhibit large and uniform surface enhanced Raman scattering activity, which has been exploited for the study of bacteria and their response to antibiotic treatment.